I’ve just completed my fourth commission of the year, and I’m especially proud of this one. I’m going to blog only briefly on what it’s about, because you can learn everything by going to the website www.composerhome.com/piano anyway, but I thought I might also share a little of the process of making it here, because it has been interesting and inspiring for me.

The Speaking Piano began life as a commission from Paul Scott Williams, director of the Goulburn Regional Conservatorium to write the incredible Michael Kieran Harvey a 25 minute piano piece. When Paul and I sat down to discuss generally what the conservatorium needed (not just in respects to the piece I was going to write), it was coincidentally on the day that Apple released its free iBooks Author, so I was already dreaming up educational books with music embedded in them. Paul described his wish to make better connections to the community of primary schools in and around Goulburn, which he felt the Conservatorium needed to further connect with and support. I’ve worked with Scott Williams for over a decade now, and he is one of the most tireless and passionate advocates of music education of everyone I know, so I wasn’t surprised to hear him espousing such a grand vision only months after taking over the position at Goulburn’s Con. 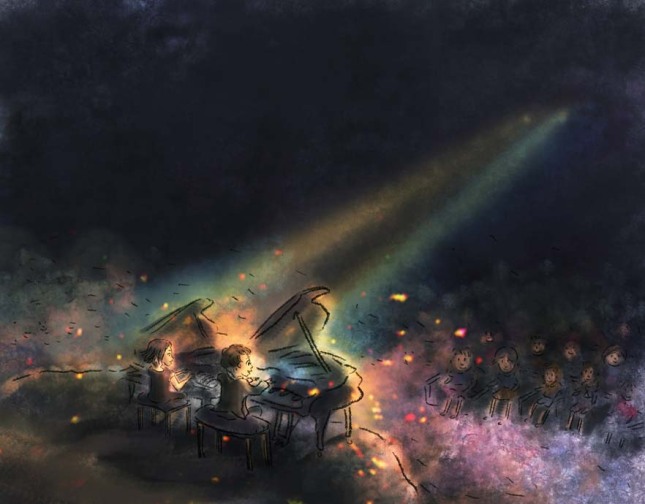 The story is of two quiet children, Lily and Jack, who learn to communicate through music

Putting these ideas together I immediately started planning in my head a book about music, and music education, written for primary children to enjoy. The book would exist as a traditional printed book, with associated music to learn, but also in a webapp and in an iBooks text book – in each case with the music and voiceover and learning videos built-in.

The story I came up with was about … well, just watch this:

Working on a shoestring budget (turns out you can’t rely on Australia Council or NSW Arts funding nowadays, even if you’re a regional con with an education project and one of the best performers in the country booked) I wrote the story and then specified what I needed from the illustrator. If you’d like to see what I wrote in the spec, you can download it here. This part of the process is very important, because if you’re not absolutely clear what you need from a freelance illustrator, you’re likely to waste a lot of time going back and forth and effectively managing their creative work (or simply not getting the quality of work you were aiming for). Look at my outline, and you’ll see it’s extremely detailed, but also gives lots of space for the artist to work within that (I was advised by a friend not to provide my own sketches of what each page should show, and indeed what the eventual artist came up with was much more creative than my ideas).

I then posted the job to eLance. There are quite a few websites like this nowadays – you post a job, and people from all over the world quote on what they think they can do it for. The quote might be an hourly rate or a total for the whole job. I had to make the quote window quite low, and many artists who I invited (you can go exploring through portfolios there and ask people to quote on your job as well as hoping they will find it) turned it down for this reason.

Of the quotes that I did get I had a shortlist of four that I really liked. I ended up choosing Little Pink Pebble not because of her experience illustrating children’s books (click her name to see her portfolio), but because her watercolours really had the dreamy, beautiful effect that I thought would bring Lily and Jack’s story alive (by the way, I haven’t written about the story, but the names Lily and Jack were chosen by my 4 year old daughter). Especially this one: 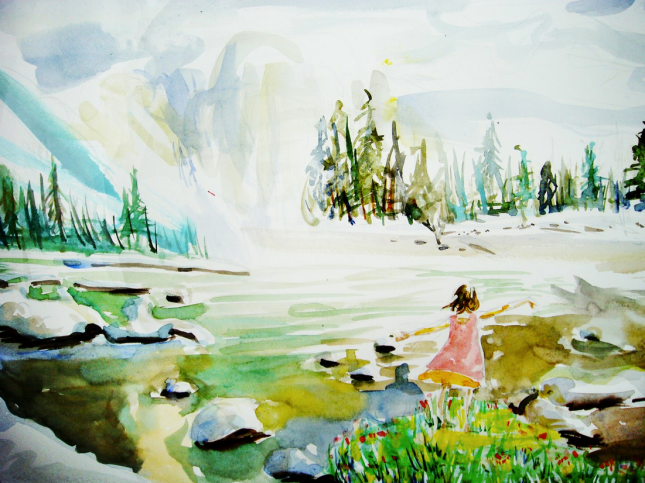 A watercolour by Little Pink Pebble

While I was waiting for the quotes to come in, I had got on with the job of writing the music. By the point I chose Pebble I’d composed over half of it, so she was able to listen to the music and respond to it with her art – and often told me this made her want to do a better job than just delivering the first completed work that she did.

Her first sketches were of Lily and Jack, and she used photos of my youngest children (and ones she found online of Michael Kieran Harvey for “Michael the music teacher”!) to inspire them. She hadn’t been imagining watercolours, but when I mentioned that was why I chose her, she decided to do mixed media, using watercolours for “real life” and digital for daydreams – blurring real life but making dreams become vivid. As the piano begins to speak for the children, these two meet. This is mostly consistent in the book, although it was much slower for Pebble to work in watercolour so a few originally planned to be in the medium ended up being digital.

The first sketches for Lily

Next Pebble did sketches of every page in the book, so I could mock it up as both a webapp and an iPad app using Apple’s iBooks Author. I completed all but one of the compositions, including the music which is not heard in the book, and made the voiceover recordings (the music you hear behind the voice is ‘performed’ by Sibelius). Sibelius First came out over this time period so I was able to export video of the three pieces that Lily and Jack learn and embed them in the digital versions of the project…

There were a number of emails back and forth between Scott Williams and myself as well as between Little Pink Pebble and I, and I introduced the project to Harvey now that there was some material to share. Pebble worked on the original works, and it was wonderful to open the mail box each morning and see what she had been working on overnight (while her time zone in Singapore wasn’t far away from mine, like a typical artist she often worked through the night!). I was able to insert the files into the digital editions to replace the sketches as time went on, and keep everyone up to date.

Finally the book was finished. I made the website/webapp in Hype, which allowed me to do the nice transitions and music and so on. I’m getting a bit better at using that program and with the impending demise of MobileMe and iWeb will probably use it to publish a new website later this year.

The feedback so far has been great (I’d love more in the comments below!), and I’m really looking forward to hearing MKH premiere the collection of piano miniatures at the Goulburn Con in August. Copies of the book and the music are going out to primary schools all around Goulburn as we speak, so the outreach project that I envisaged is really happening. And, because it lives online and is free, it’s really an outreach project to the world! I’m looking forward to doing some more projects like this in 2013…

7 thoughts on “The Speaking Piano”