This week we started with a reading exercise instead of the usual learning by copying or by rote. We used a transcription I’d made of the Penguin Café Orchestra’s rather fabulous Music for a Found Harmonium and discussed what our teaching strategies would be if we weren’t a group of twentysomethings (self excluded) who could already read. Here’s a fabulous recording from 1989 which looks like it should have been 1979…

This is a great piece to use because it’s so much fun and fits into so many different topics. We had watched the bit from Napoleon Dynamite that made this piece famous for a second time a few years ago, so you could make a tenuous link to Film Music. Then there’s a minimalist influence (20th Century Music), the folk influence (Music of a Culture), and obviously it can go under the Rock or Pop music options too.

I told you about Jon Madin and his wonderful wacky instruments on which he performed this piece last time I was working with him. Check out his website and consider buying his books for all sorts of useful hints like how to build your own marimbas and some wonderful arrangements for all sorts of tuned and untuned percussion.

We did a couple of performances, and I think this was the best one… again proudly brought to you by AudioBoo from my iPhone. Quick and simple publishing to the web/Twitter/Facebook etc…

The more lecturey bit of the lecture

Once all of that fun was over you had a lecture about LMSes – Learning Management Systems. You all know what an LMS is even if you don’t realise it, because you have to use vUWS which the UWS’ LMS. And in your preparation for assignment 1 you’ve been making WordPress work like an LMS for you – so you can deliver a unit of work from it.

I showed you a unit of work delivered in the LMS we use at my school, and gave you some ideas for keeping instructions short (bullet points are good) and the page visually attractive. We talked about using diagrams and video tutorials which may be videos shot through a camera or screencasts (and I gave you more ideas about that later). I showed you more of the videos I’ve made, and you can check out loads more on my website. I showed more Lisa Dawley slides, this time on design: 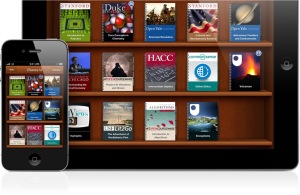 We looked at paid and free resource solutions, including the amazing iTunesU where you’ll find a gazzilion free and amazing resources, YouTube (of course), Naxos Music Library, and Grove Music, and then a number of similarly free or paid LMSes including Studywiz, Edmodo, Schoology, Moodle, and the new OpenClass from Google and Pearson. I also mentioned that Google’s Apps such as Google Docs, Calendars and GMail were very big in education as tools and did some of the things LMSes do. In this context we discussed websites like MySpace, TheFacebook (“lose the ‘the'”) and Ning. There are dozens more social platforms which are great for learning if you can get through the child protection issues surrounding their use. By the way, vUWS is built on Blackboard, should you want to know which website to throw things at.

Last but not least, the lecture spilled into …

Having run out of time in the lecture, I demonstrated Screenflow, a Mac-only screencast app which I make all my tutorials with. As far as I’m concerned it’s the Rolls Royce of screen casting, but I also mentioned Camtasia, Jing (a free tool) CamStudio (also free) and that the more recent versions of Quicktime on a Mac can record your screen.

While I was demonstrating Screenflow as an example I explained what Sibelius’ Ideas Hub (now called the Ideas Panel in Sibelius 7) does – in many ways like a loops browser for Sibelius, but also as a scratch pad for composition. If you’re interested to learn more, check out Robert Puff’s blog about it. And then, check out many of the resources I’ve made using the Ideas Hub as a place to get students started on composition, for instance my Paul Grabowsky Education kit.

So there you go. You now know how to build a unit of work online, with all the bells and whistles that I use. Perhaps some of you will come up with ideas I hadn’t thought of – I notice one student embedding Soundcloud MP3s in his WordPress site which is a great idea! Thinking next time you might like to build an online unit on a different website? Try this comparison of free tools for building websites. Good luck with assignment 1!